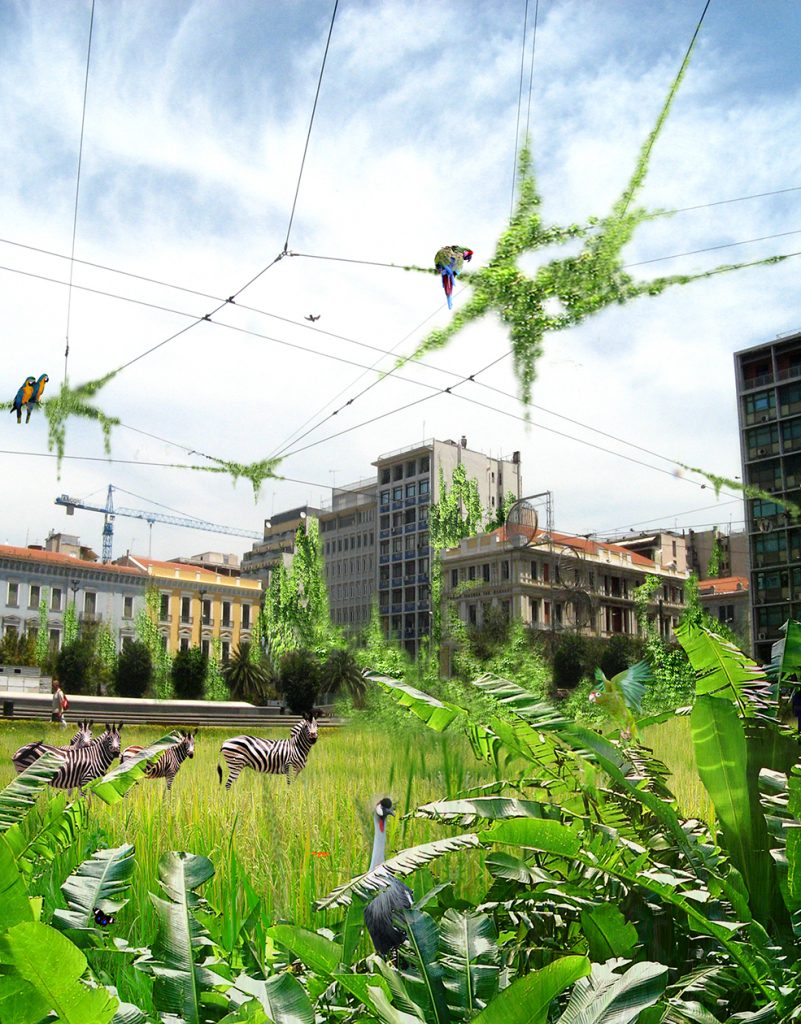 Omonia Square, the oldest (dated in 1849) square and one of the most prominent reference points in the city, has historically gone through a series of restorations and transformations and, for decades, used to spurt liveliness, colours, smells, music and fun. However, all the signs of its glorious past, such as flowers, palm trees, muse statues, fountains and lakes, have gradually disappeared. Ever since the 90s, and in the wake of the 2004 Olympics, the cultural personage of Omonia Square has become a gray, cemented block.

Its personality used to be twofold: a meeting point and a strolling area for Athenians and visitors, as well as an intersection for the interconnecting shafts of the urban city centre. Sadly, this personality has now become single-dimensional, maintaining the character of a soul-less, stripped, anhydrous and plant-less intersection a radial street network that spreads the ill characteristics of its impersonal materiality towards the broader backdrop of the city.

Right at this point, a dialogue starts between reality and imagination. Wild vegetation begins to take over, sprouting from the cracked and deserted cement tiles of the Square, and – through artificial seeding – scales itself towards the aerial trolley wires. The “wilderness” of the urban daily life of Athenians “untamably sprouts” and the most cement-dominated square of the city transforms into an imaginary, lively savannah. The familiar expression “it’s a jungle out there” – utilised to convey the despair against the harsh sociopolitical, financial and environmental circumstances – becomes a literal reality, an architectural gesture that turns Omonia into a glorious, unexpected urban event. Thus, the Square gains an opportunity to relive the glamour of a differentiated urban legend.

When first constructed, Omonia used to be the northern edge of the city and the end destination of the casual, country stroll of the Athenians. Nowadays, strategically situated at the core of the city, it becomes a “country destination” yet again, offering visitors the newfound, unpredictable sensual experience of a tropical, Athenian savannah that awaits its various “safaris” (wild nature observation, sightseeing, entertainment, dream and rest).

The foreign nature of its new character, as well as the free, unplanned and unruly new topography of Omonia Square, are intertwined with the urban setting of Athens through their contradictory programs and aesthetics, and through their common denominator which is none other than anarchy.

Omonia Square becomes an “Anti-Athens landmark”, a tropical islet whose paradoxical coexistence with the broader urban landscape – as an exception to the rule – brings the latter out. The amalgam of neoclassical, interwar and postwar buildings that surrounds the Square becomes an indispensable element of the new canvas, an inseparable soul mate within this new conversational relationship, which ultimately, and in equality, rises to become an Athens landmark in itself. 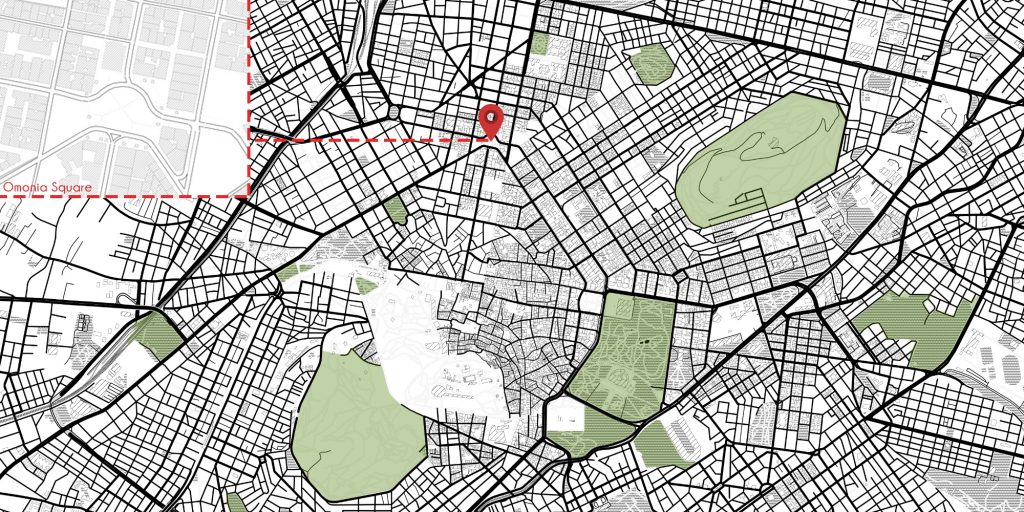 The lawlessly built, polikatikia-congested surroundings, now display a set of rules and a distinct geometry for the sake of the Athenian eyes. It becomes visible, perceptible, recognisable and unique! Polikatikia and its interaction with the free, public space, with the lost natural topography and with the greenery, become the new object of discovery, observation, inspiration and redefinition for everyone. The new Square momentum and its oxymoron works as a catalyst for the entire city. 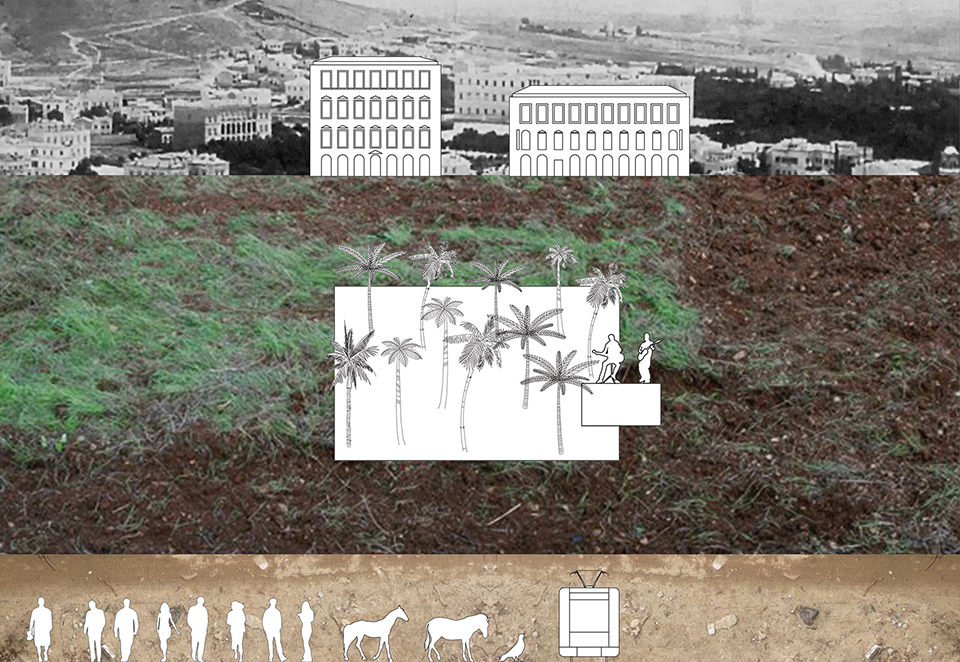 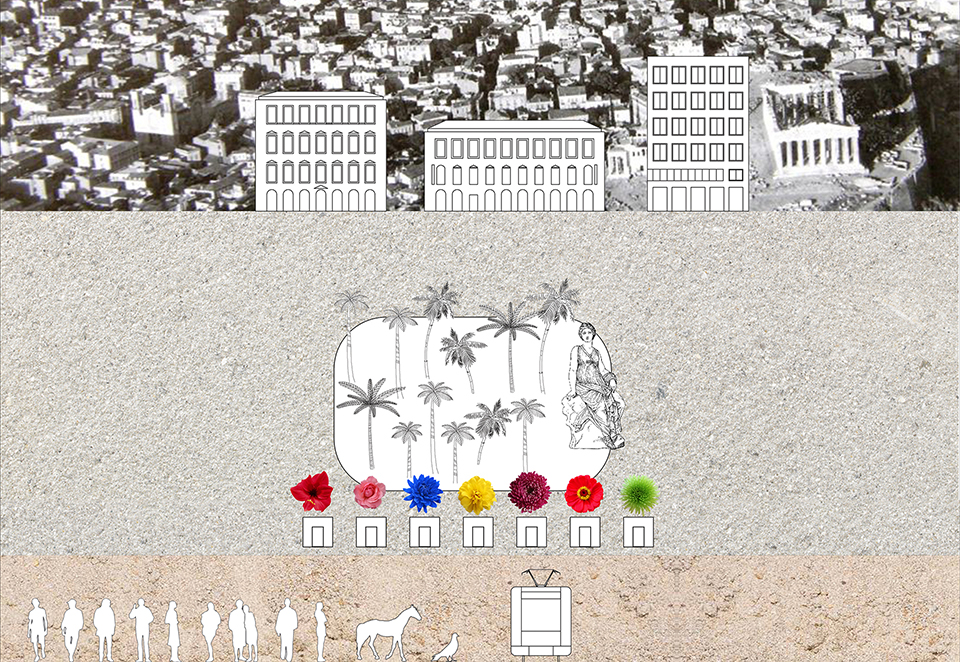 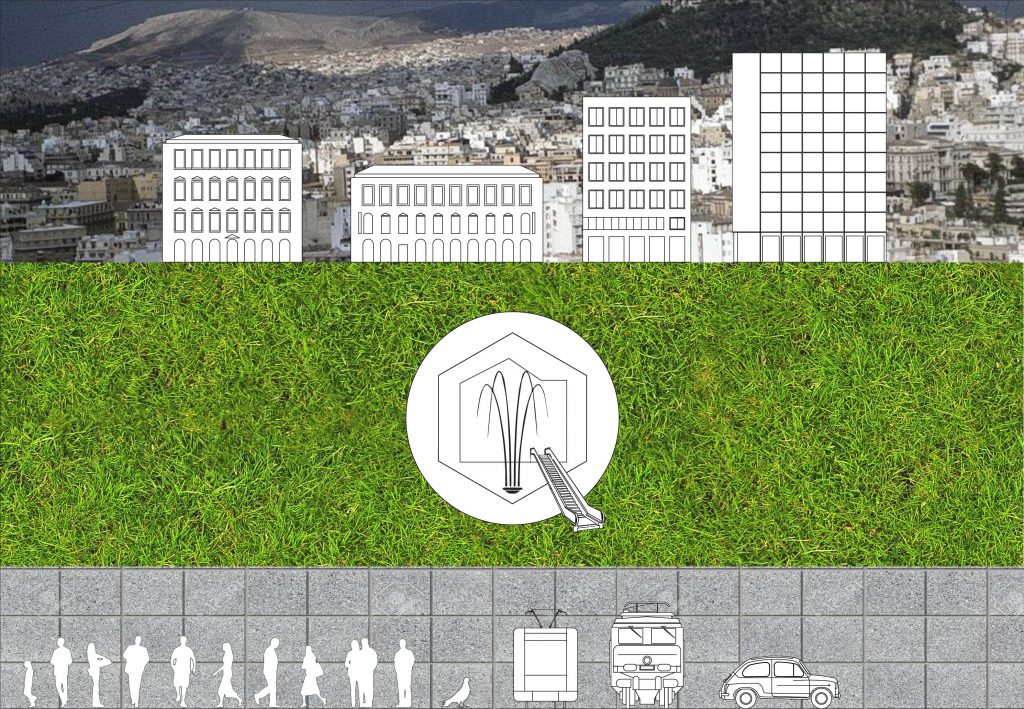 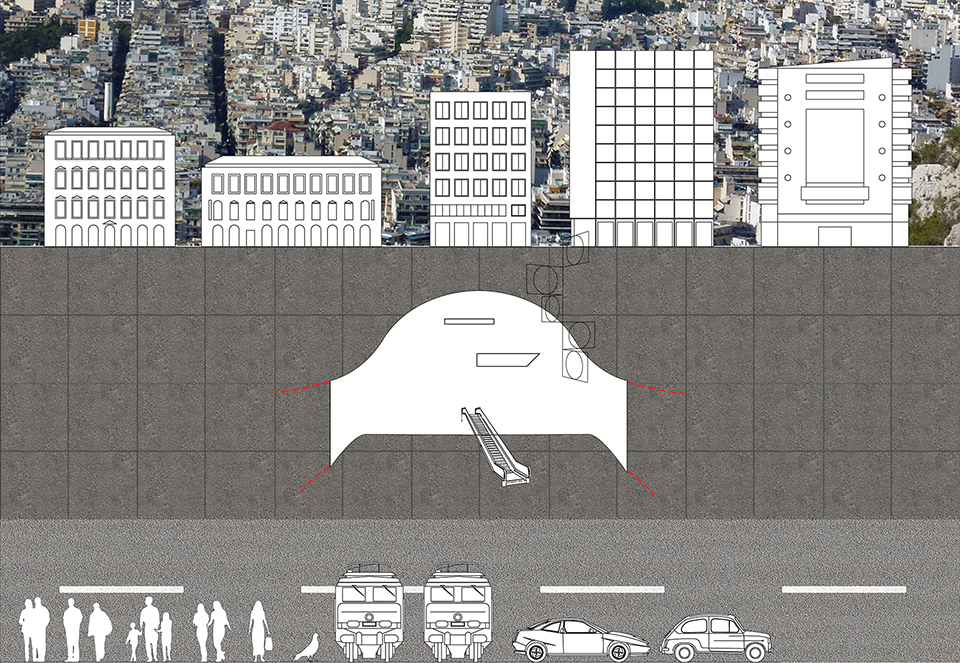 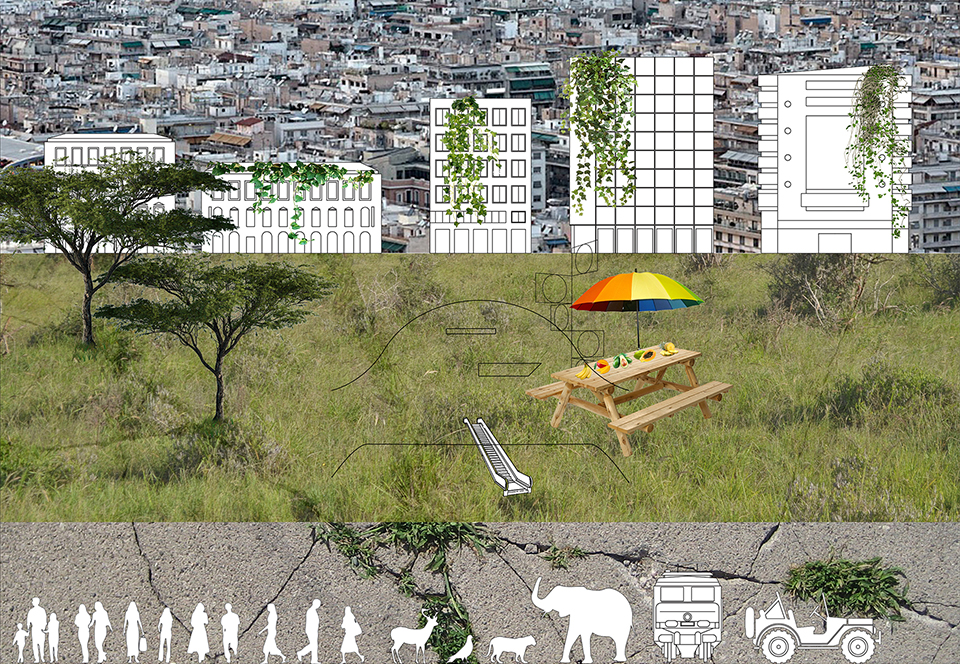 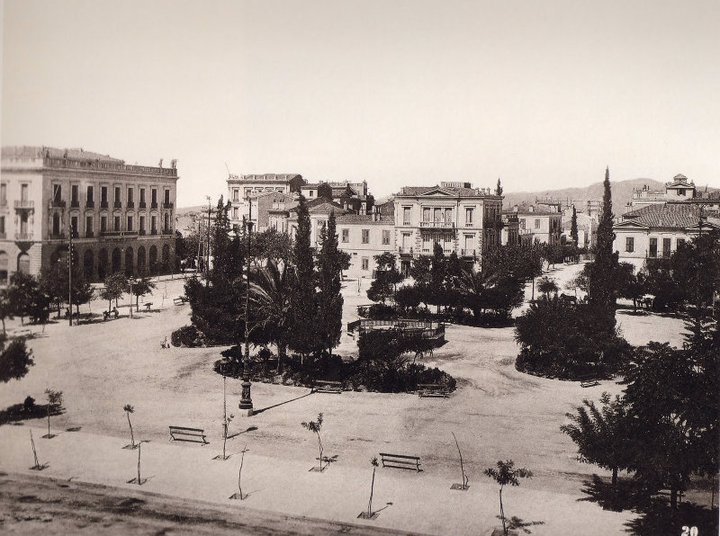 Omonia square, 1890. An exagonal raised platform for the music bands is located in the middle of the square
photo:  Αφοι Ρωμαΐδαι 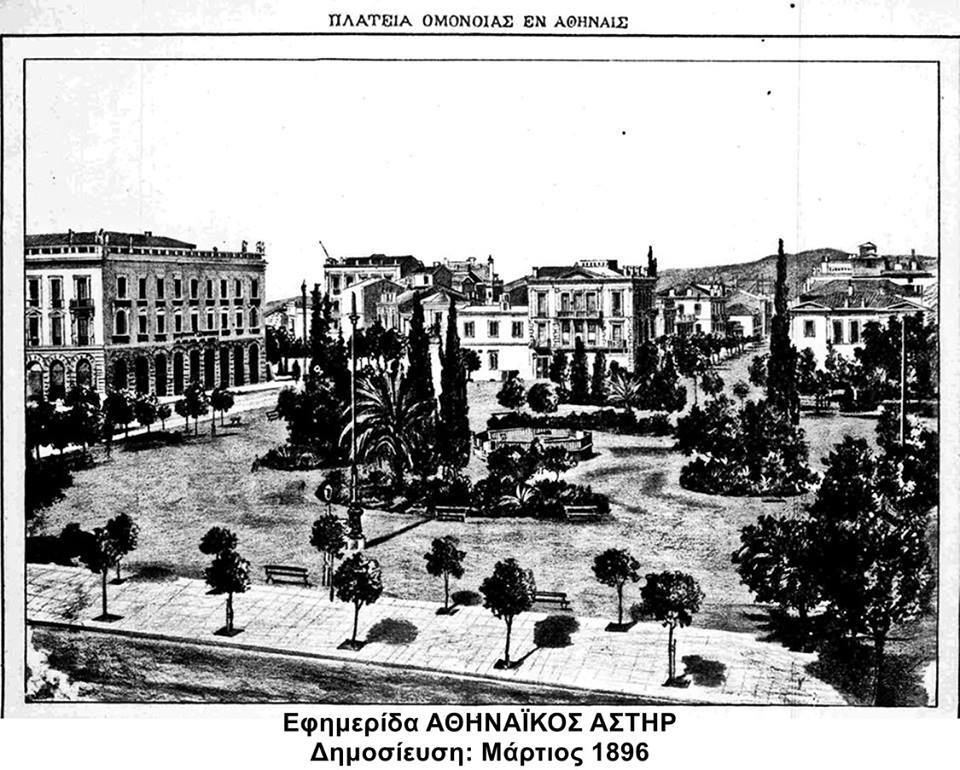 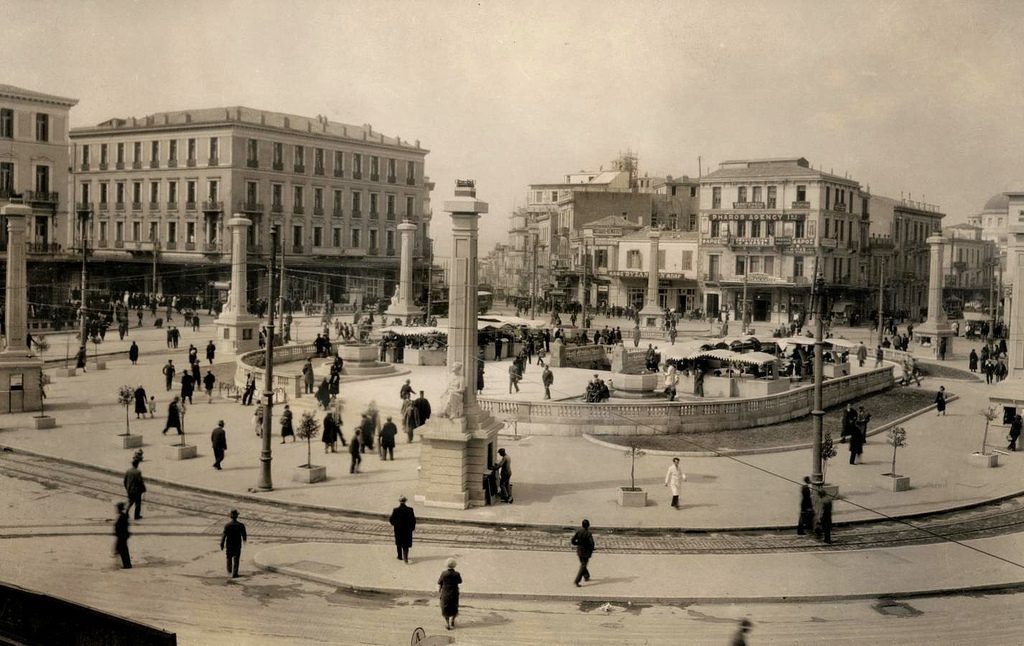 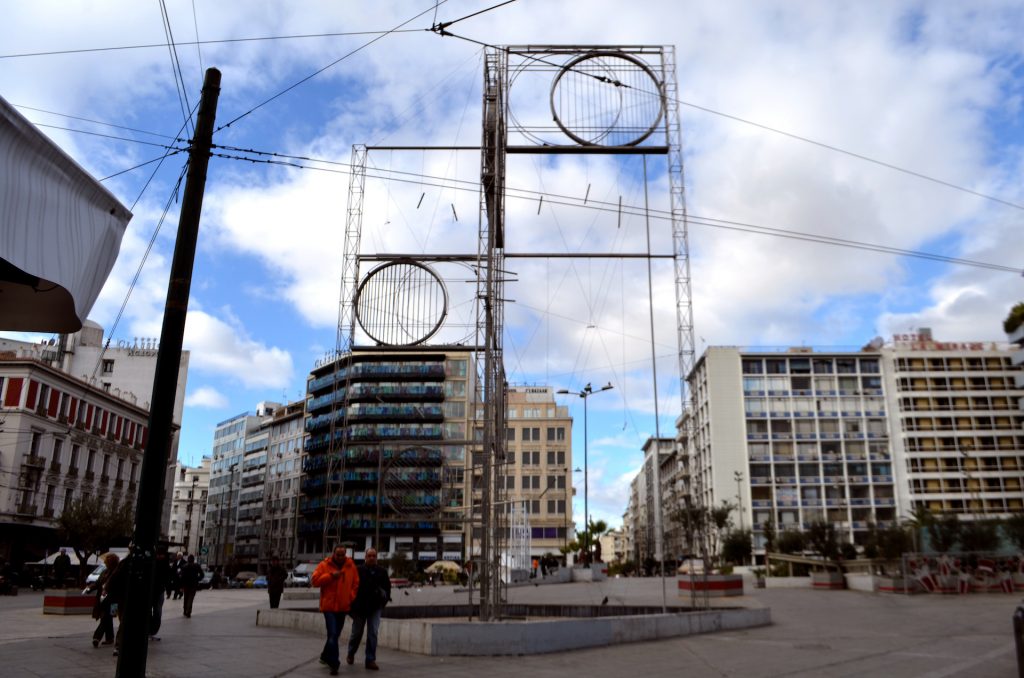