The aim of the new museum is to create a landmark worthy of holding an invaluable cargo: the mythical ship “Argo”, which is the historic symbol of the town Volos. Not only shall the museum serve to promote the ship and its history, but it shall contribute towards the development of the town by presenting and publicizing ancient and contemporary culture within the urban structure. 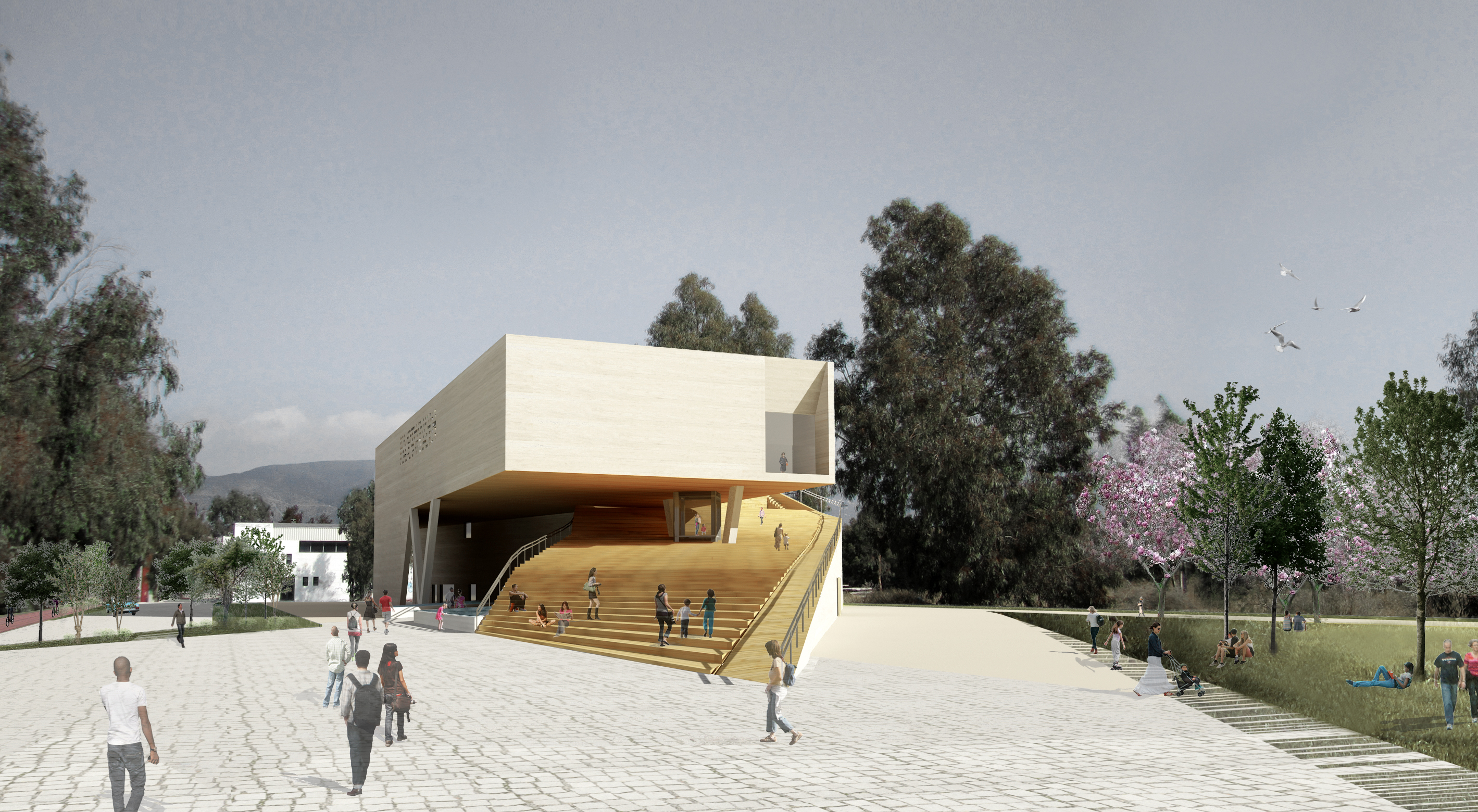 The concept for the museum centers around notions inherent to Greek mythology: man – demigod – god. Founded on those, the museum is separated into independent, but nevertheless intrinsically united spatial entities.

Running parallel to the foreshore, the first unity, a construction with a corrugated roof and deeply rooted into the ground, represents the human dimension. Turned towards the axis of Athinon Street, a second structure – in an elevated, archetypical trapezoid and party floating shape – refers to the demigods. The common space created by the fusion of the “human and demigodly” elements houses the principal exhibit of the museum, the modern Argo, while the empty space between them bespeaks the intangible, the “divine”. This gap embodies the core of the design proposal. Through its presents it commemorates the mythical Argo while insinuating the lack of an actual archeological find. 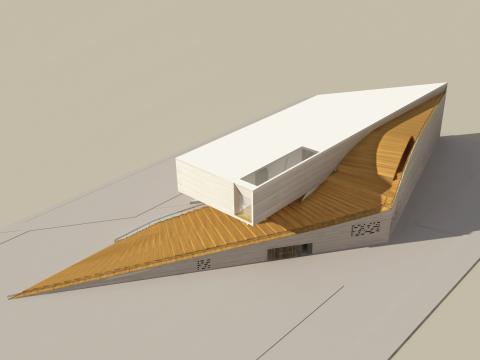 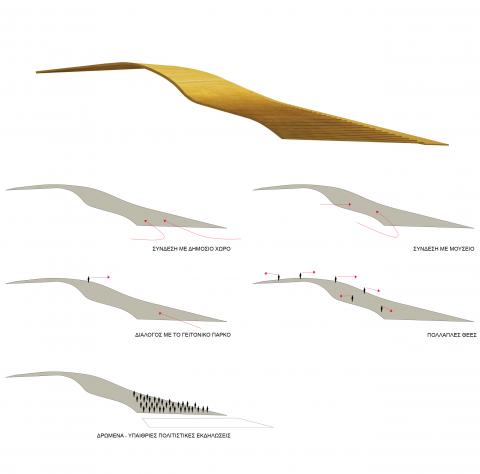 Wooden terrace allow free access to the visiting public turning the emptiness of the space into the most dynamic and lively area of the museum thereby enhancing its recreational and cultural objectives while offering a multidimensional intake of the surroundings of the city, its mountains and the sea. Here the aim was to lure visitors into the space at all times and hours of the day. 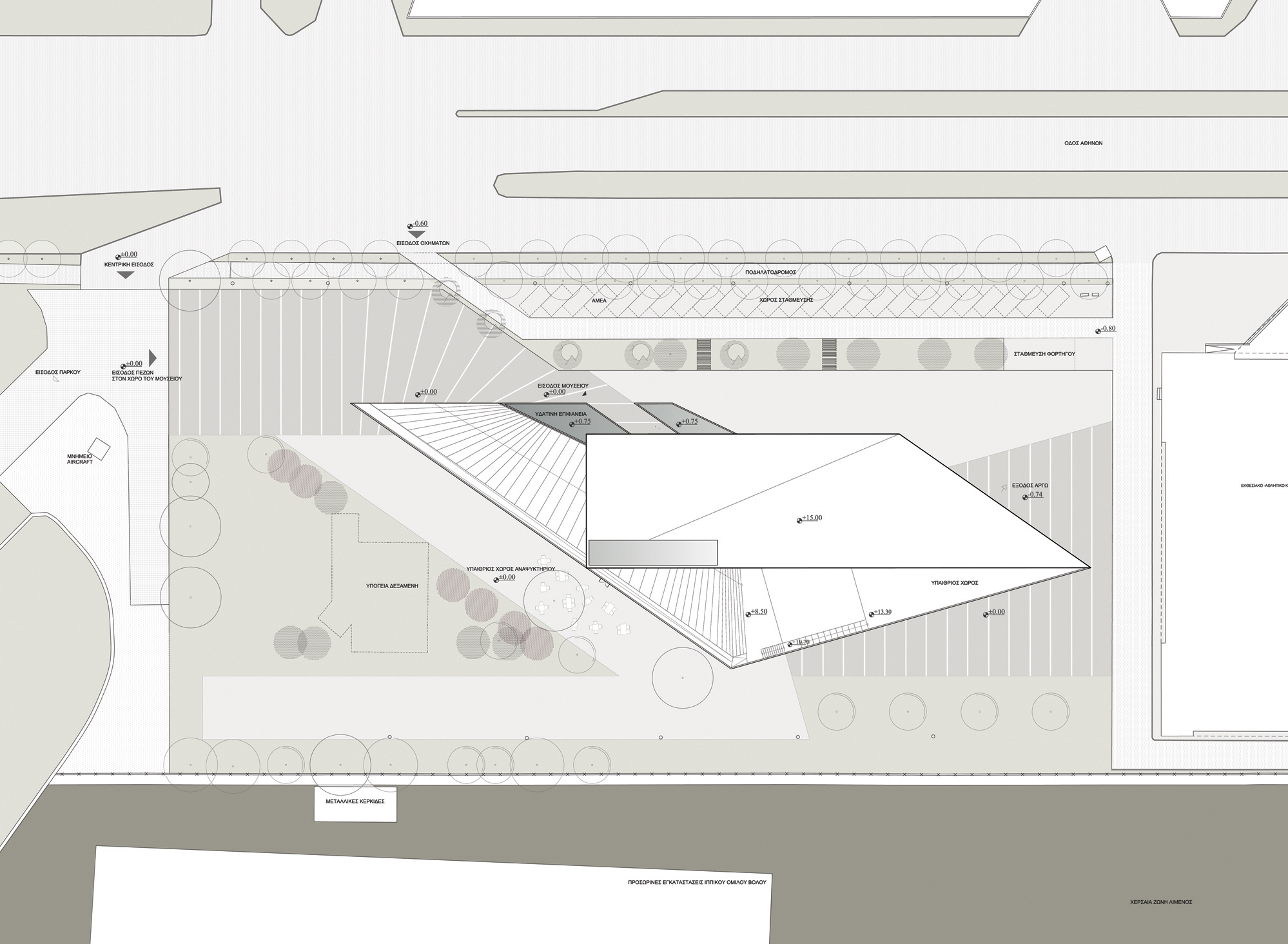 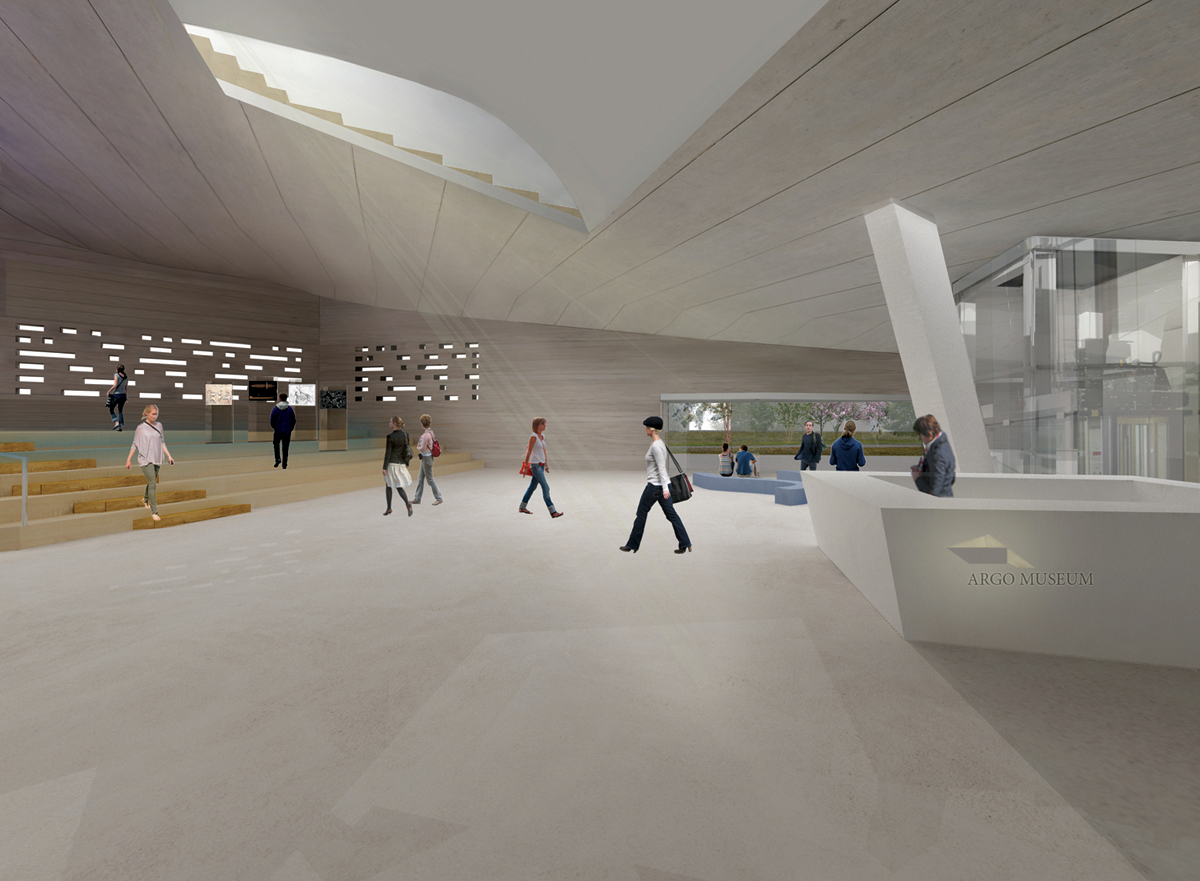 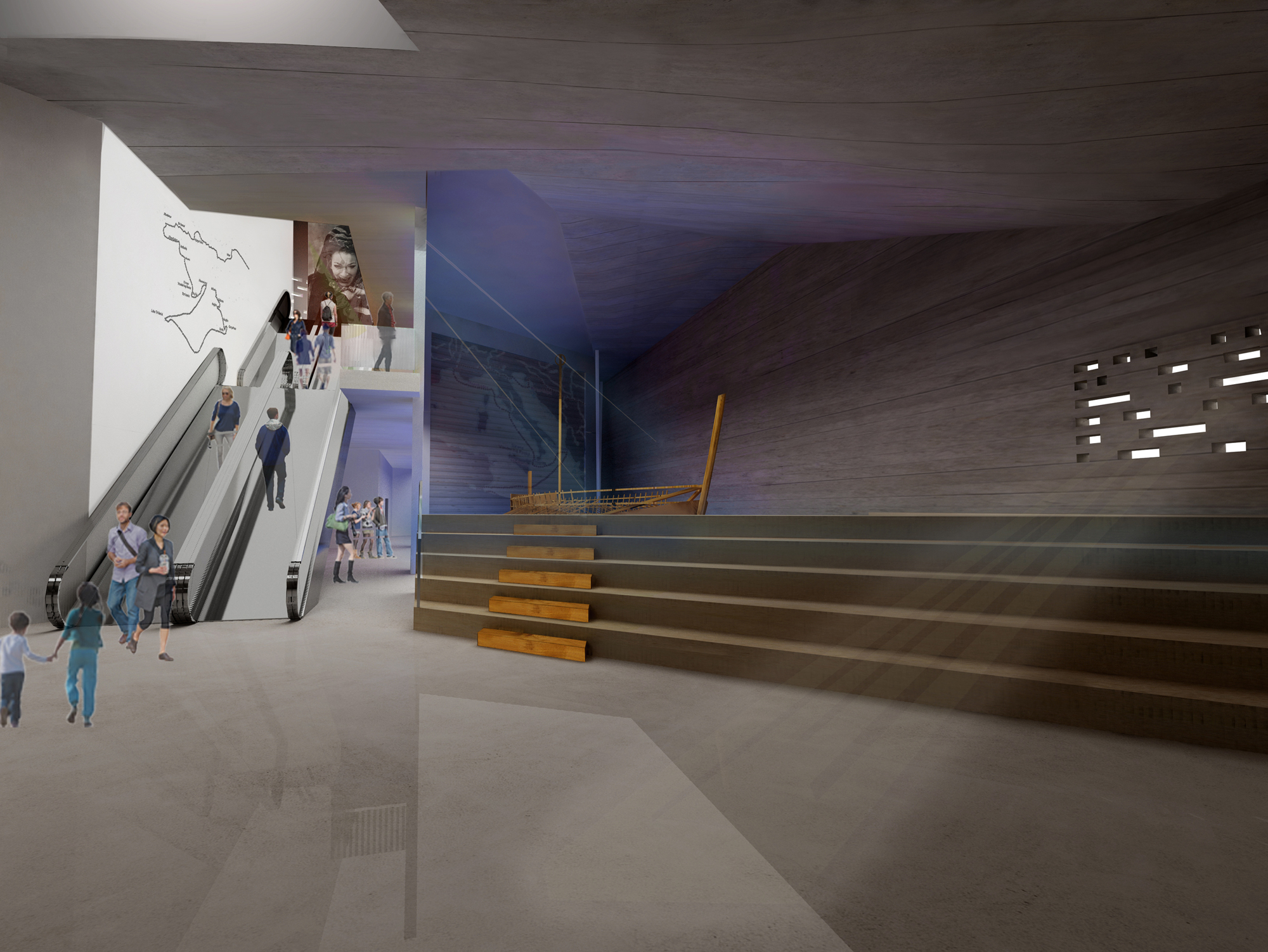 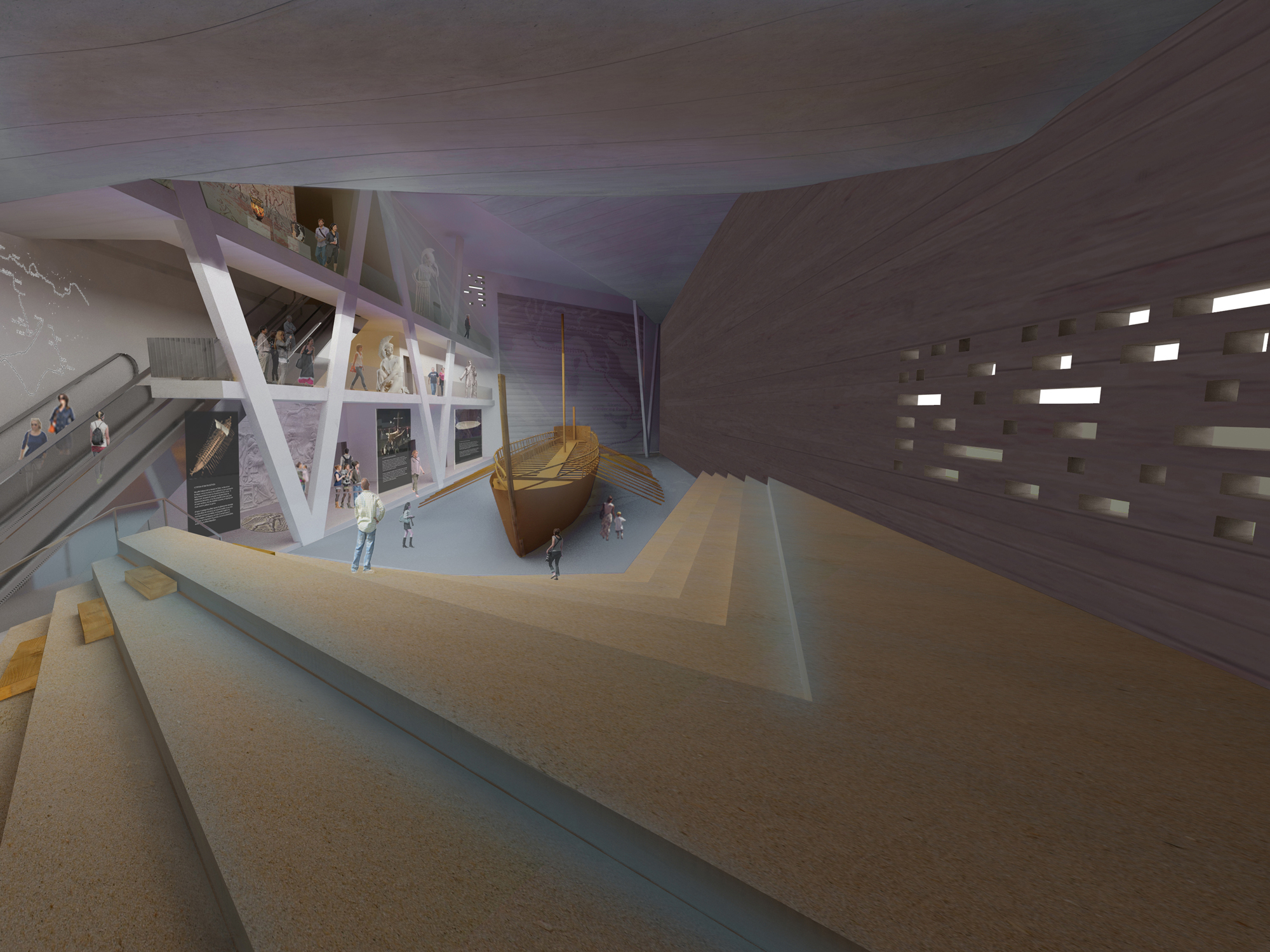 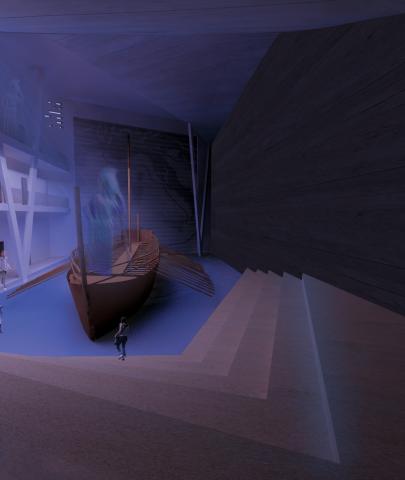 Smaller and larger architectural manipulations, stage design lighting and the use of digital projection media – offering experimental and interactive experiences-   allow the visitors to take a journey with their minds into the inner spaces of the museum.

In contrast to the elusively intangible perception of lighting and the interactive application of technology, the exterior of the museum is characterized by solidity and mass, standing strong and stable on the ground. The main construction materials – exposed concrete, the local limestone, wood and Pelion slate – emphasize the timelessness, the bioclimatic operation of the museum and its inclusion into the topography of the area while at the same time requiring only low maintenance costs.

With the framework of an architectural proposal with multiple qualities and controversies, the Museum of Argo creates a new platform promoting history and contemporary culture as well as introducing a new dimension into the cultural landscape of Volos.