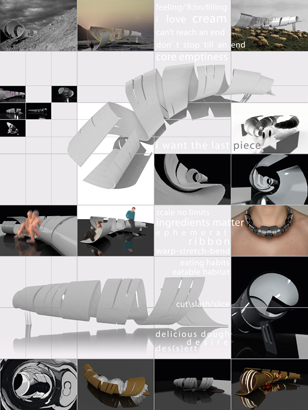 Start tasting, with a fond desire, keeping the in-visible piece for the end.
Feeling the filling, longing for the greatest satisfaction…
Nothing more than imaginings.

dARCHstudio designed on paper an architectural folly that can be translated into another medium, one that happens to be edible. The designed object can be seen as an ephemeral construction in everyplace, a furniture , a jewel or an edible cornet, in proportion to it’s material and scale.

After Milan, the exhibition travels to Paris, London and New York.